Innovating Japanese down wear since 1951

Tracing their roots back to post-WWII Japan, Zanter have established themselves as the first and longest running purveyors of down wear in Japan. Fulfilling the outerwear needs of Japanese researchers and mountaineers in the most unforgiving of environments, has fueled the brand to continue to innovate and bring warmth and joy to all that don their outerwear. Over their 60+ year history, Zanter have supplied the likes of the Manaslu Expedition Corps, along with countless Arctic and Antarctic research expeditions. Skip forward to the 21st century and Zanter show no slowing down of supporting Japanese explorers to brave the harshest conditions on the planet. In 2018, Yasunaga Ogita became the first Japanese person to reach the South Pole solo. Wearing down wear tailor-made by Zanter's "Polewards" division, Ogita covered a staggering 1,126km over 50 days by foot in order to achieve this incredible individual feat. In a space where outerwear is commonly talked about as "just fashion", Zanter and their ethos continues to defy this notion. It is thanks to the spirit and undeterred resolve of those that rise up to the ultimate challenge, that we can thoroughly appreciate these amazing down wear pieces. 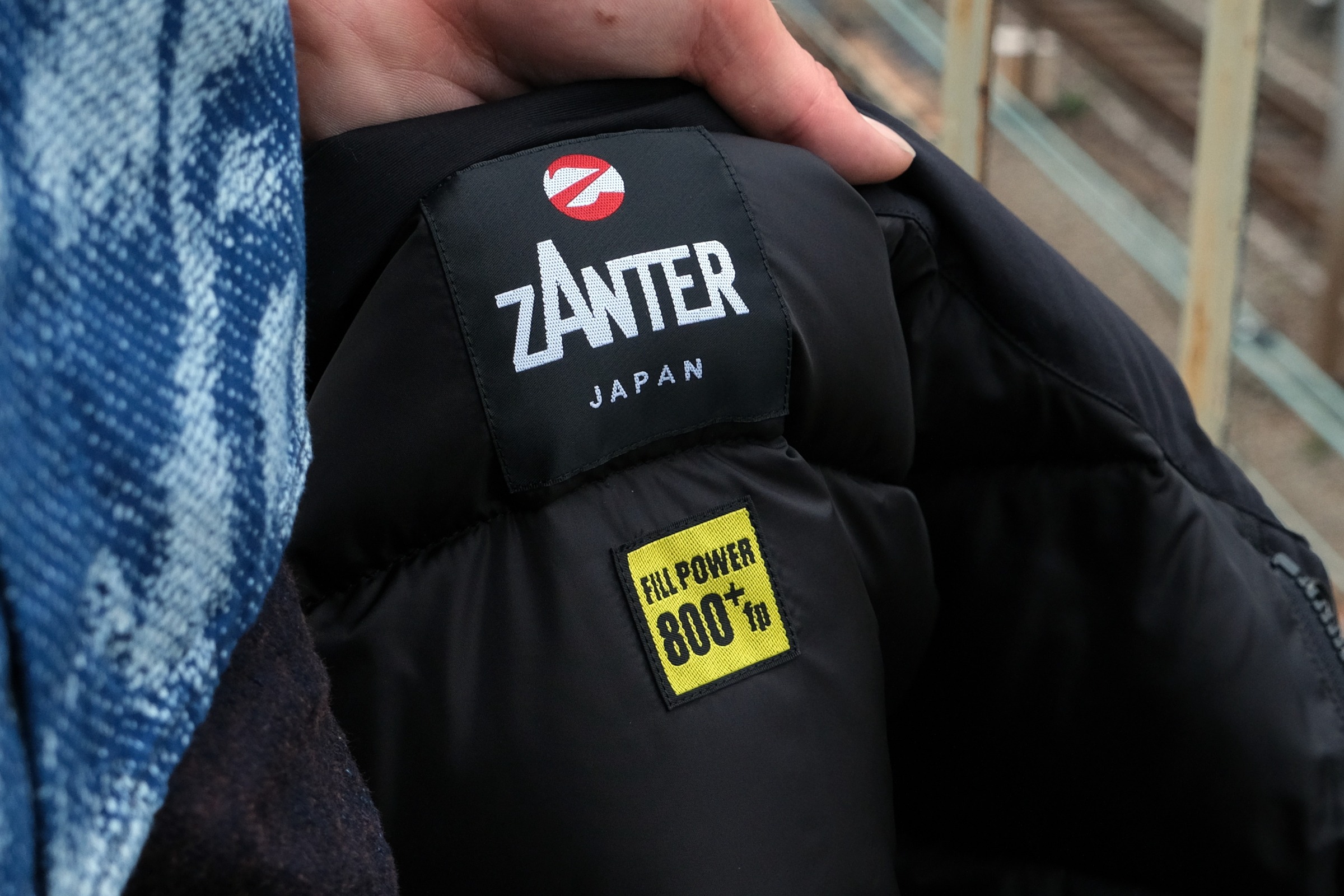 It's quite hard to articulate just how unbelievably warm Zanter's outerwear pieces are, but we will let the numbers do the talking here. In down wear terms, there is a figure that suggests the number of cubic inches that one ounce of down feather occupies, and it is known as Fill Power (FP). Clocking in at 800FP, this dizzying number is undeniable proof that Zanter's down wear is easily capable of combatting sub-zero temperatures.
Further testemant of the lengths that Zanter have gone to guarantee the best insulation possible, is the use of the highest quality down. The quantaties of such feathers are extremely scarce, to say the least. At the most, only 10g can be found on the chest area of a suitable Waterfowl. The quality of feathers is also greatly affected by breeding method, environment and feed during infancy. These carefully selected feathers then go through a thorough process of washing, drying, dehydration, sterilization and dust removal which results in Down that not only has excellent heat retention properties, but is also durable and sanitary.

Taking cues from their Antarctic Research line, Zanter's Down Parka Jackets deliver heat like no other. The 3-layer Nylon outer shell, packed with that 800FP down fill is just scratching the surface.
A strip of "MOFF" mesh lining is used around the neck, an area especially vulnerable to moisture from sweat and blowing snow. The jacket also features a detachable hood making it superbly adaptable. There is also absolutely no shortage of storage space, with oversized pockets featured both on the exterior and interior of the jacket. Secured with an inner zipper opening and oversized tagua nut button front placket, there is simply no room left for the harshest of elements to breach.

Versatility, durability and warmth is Zanter's Down Vest in a nutshell. The Zanter crew sure know how to condense all of these qualities into a simple piece of outerwear with absolute zero compromise. If you're looking for a layer to keep you warm to the core while on the move, look no further.
Upping the thickness ante, the 4-layer outer shell construction guarantees unbeatable insulation. Zanter have managed to achieve all of this while keeping the aesthetic sleek and overall weight to a minimum. What's more, with the inclusion of hand warmer pockets and a double-secured front zipper+snap button opening, you'll be able to take on those chilly days with impunity.

Designed through a more traditional lens, the loosely fitting silhouette of this haori pairs is the perfect match to be lined with Zanter's 800FP down fill. Whether you rock it with just a tee indoors or if you're layering a hoodie underneath on the go, this jacket provides superb versatility when it comes to styling
While you won't see this in the Arctic anytime soon, the Nylon Ripstop fabric shell is tough as nails - just like the explorers who rise up to the ultimate challenge!